RETROSPECTIVE -- “GRAIN OF THE VOICE“.rtf

“GRAIN OF THE VOICE”
A Retrospective Season
50 Years of Sound and Image by Arthur and Corinne Cantrill
October 10, 17, 24, 31, 2010, at 3.15 pm
ACMI Cinemas
Australian Centre for the Moving Image,
Federation Square, Melbourne
Enquiries: 8663 2200 http://www.acmi.net.au/cantrills-grain-of-voice.aspx

Curated by Jake Wilson, film critic for The Age, who wrote the following notes.

Spanning fifty years, the experimental film work of Arthur and Corinne Cantrill examines a vast range of people, societies and landscapes, always varying its technique in response to the subject-matter. While constantly exploring the material properties of the moving image, the Cantrills have been equally innovative in their use of sound.
Borrowing its title “Grain of the Voice” from an essay by Roland Barthes, this retrospective emphasises the many voices that are heard in their films -- belonging to artists and friends, to cultures from around the world, and to the natural environment.

VOICES OF OTHERS -- Sunday, October 10

This program of short films by Arthur and Corinne Cantrill draws attention to the “grain” of voices from many cultures, beginning with Adventure Playground -- London, in which the cries of children suggest how close humanity remains to the natural world. Different kinds of indigenous Australian voices accompany Bouddi, shot in the bush near the New South Wales coast, and the slower-paced Two Women, inspired by a Pitjantjatjara song cycle telling of the journey of two ancestral beings along the MacDonnell Ranges. The Pause Between Frames and Ramayana/Legong follow the rhythms of Balinese music and dance. Filmed a few years before the end of the Cold War, Notes on Berlin: The Divided City is among other things a record of the sound of the German language as spoken by different generations on both sides of the Iron Curtain, intercut with German music from the Baroque period to the twentieth century. Capricornia shows the natural beauty of the North Queensland rainforest overpowered by the gabble of tourism, while The Room of Chromatic Mystery generates a suggestive aural landscape from shortwave radio broadcasts mixed with other sounds including voices from earlier films.

The screening will be followed by a discussion with:
Dr. Mark Nicholls, Senior Lecturer in Cinema Studies, University of Melbourne, and a writer, theatre producer and director;
Clinton Green, writer, musician, researcher and producer of Australian experimental music CDs, through Shame File Music;
Jake Wilson, curator of this Retrospective, and film critic for The Age;
Jim Knox, film curator for the Outlands Ecoplex, and on the editorial committee of Soundscape, the journal of the World Forum of Acoustic Ecology. 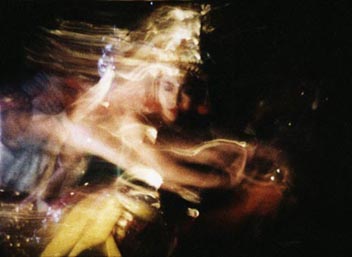 Even when human beings are nowhere in sight, the Australian landscape is full of sounds -- the voices of birds and insects, of the wind and of water. This program of short films by Arthur and Corinne Cantrill ranges across the country from the Victorian coast in Airey's Inlet, to Central Australia in The Second Journey (to Uluru), Stradbroke Island in Island Fuse and the Grampians in the three-colour separation film Waterfall.
Shot on the ruined site of a failed sheep property in the Black Range of Western Victoria, The Land is Not Empty is an extended meditation on a haunted land, with the camera following the movements of a trudging observer, and a soundscape designed to convey the anguish of loss.
The program concludes with three two-screen works: Interior/Exterior, an exploration of the difference between human and camera vision; Meteor Crater -- Gosse Bluff, in which a panning camera traverses the interior of a large crater in Central Australia; and Corporeal, shot in New South Wales bushland at the edge of a rock pool, the camera rising and falling with the filmmaker's breath.

The program will be introduced by Clinton Green, writer, musician, researcher and producer of Australian experimental music CDs through his label Shame File Music. In 2010 he released the CD, Chromatic Mysteries 1963-2009, a selection of Arthur Cantrill’s soundtracks.

Above: frames from the two-screen Interior/Exterior (1978)

Airey’s Inlet (1997, 5 mins) Coastal scenes filmed with an energetic pattern of two frames image/two frames black, intercut with Ivor Cantrill’s painting of the scene. Sounds of the sea are mixed with vigorous violin improvisation.
The Second Journey (to Uluru) An extract from the 74-minute film. (1981, 18 mins) In the heat of the day the filmmakers withdrew into the caves of Uluru; some geologically monstrous, others delicate like frozen wave forms, some with Aboriginal paintings.
Island Fuse (1971, 11 mins) Black and white footage shot in the early 1960s is reworked in colour, using rear-projection, revealing the interaction of camera and projector, the play of colour filters, the film strip, film grain, and movement analysis.
Waterfall (1984, 18 mins) The three superimposed images of the waterfall combine into a solid, white volume, surrounded by primary colours caused by variations in the flow patterns. Time is registered as colour.
The Land is Not Empty (2000, 26 mins) Filmed on l6mm Kodachrome which heightens the textures and depth of this harsh landscape -- a study in browns, yellows, greys and blue sky.
Interior/Exterior (1978, 3 mins) Each screen shows exposure variations in a room with a seated figure, the sunlit bush seen through large windows, its tonality altering with the exposure changes. A stereo track of birdcalls and voices was added in 2010.
Meteor Crater -- Gosse Bluff (1978, 6 mins) The 360 degree camera movements in opposing directions on each screen are filmed from the centre of the crater. A stereo track of wind, crows and bowed cymbal was added in 2009.
Corporeal (1983, 18 mins) Body / Breath / Camera movements -- to a stereo recording of bush insects rising and falling in counterpoint with the image.

Arthur and Corinne Cantrill’s earliest works included a number of traditional art documentaries, but their collaborations with artists in different media soon took on a range of more adventurous forms. The printmaker Charles Lloyd outlines his working methods with precision in The Incised Image; the prodigious mime Will Spoor explores the possibilities of the human body in the comic and startling Moving Statics; the poet Jas H. Duke pays tribute to Dada (and demonstrates his ability to keep still) in a three-colour-separation fragment; and the “sound poetry” collective Arf Arf functions as both artists and models in Ivor Paints Arf Arf.
All of these figures (and others) are allowed to speak for themselves, with the timbre and rhythm of their voices conveying as much as their words. The program concludes with the rotoscoped Myself When Fourteen, a tour-de-force of optical printing made with the collaboration of the filmmakers’ son Ivor.

The program will be introduced by Jennifer Phipps, an independent curator and writer on Australian art, including sound art events.

Jas H. Duke Fragment (1976, 6 mins) Jas Duke performs his sound poetry to three-colour separation studies of himself.
Skin of Your Eye extract from the 117-minutes film: Roget (1973, 3 mins) A play on Roget’s Thesaurus entry, “Perceptions of Light -- 441”, filmed at the Pram Factory.
The Incised Image (1966, 23 mins) Australian printmaker Charles Lloyd at work in London.
Moving Statics (1969, 28 mins) A collaboration with Dutch Mime Will Spoor, and his group, in London.
Rehearsal at the Arts Lab (1969, 4 mins) Will Spoor rehearses a Tardieu play at the Arts Laboratory, London.
Skin of Your Eye extract: Think of a Movie (1973, 12 mins) The recapitulation that ends the 117-minute film.
Projected Light extract from the film-performance work: Futurist Sequence (1988, 2 mins) Single-framed impressions of 'Prestonia' to Futurist music.
Ivor Paints Arf Arf (1998, 6 mins) A three-colour separation of Ivor painting the Arf Arf group and performing with them on the soundtrack.
Myself When Fourteen (1989, 19 mins) Ivor Cantrill reminisces to his rotoscoped film, derived from footage of him shot in 1974. Music by Chris Knowles.

Above: frame from Myself When Fourteen (1989)

Inspired by the philosophy of the maverick poet Harry Hooton (1908-1961) -- a key influence on the Sydney Push -- the 1970 feature Harry Hooton is dominated on its soundtrack by the assured, arresting voice of the poet himself, drawn from tape recordings made shortly before his death. Hooton defined art as “the communication of emotion to matter” and the Cantrills mobilise an encyclopedic array of techniques, from collage to pure abstraction, to visualise his dream of a world where humanity transcends itself via the machine.
The program includes five closely-related short films made around the same period as Harry Hooton, which in most cases contain footage revisited in that film: Robert Klippel -- Junk Sculpture No. 3, 1963, one of a series of studies of Klippel’s work; Imprints, an experiment in “persistence of vision” made with the mime artist Will Spoor; FUD 69, a fast-paced record of a student drama festival at Australian National University; Eikon, in which a serene image of a young woman (Sharman Mellick) is flanked by side panels of movement; and the eerie Home Movie -- A Day in the Bush, with the Cantrills’ young son Ivor in a central role.

Corinne Cantrill will introduce this screening.

Robert Klippel -- Junk Sculpture No. 3, 1963 (1965, 4 mins) The internal dynamics of the sculpture are visualised, with harpsichord music composed and played by Larry Sitsky.
Imprints (1969, 4 mins) A footnote to Moving Statics with a stereo soundtrack of fragments of Will Spoor’s voice added in 2010.
FUD 69 (1969, 6 mins) Glimpses of the 1969 Festival of University Drama, with an animated who’s who of the 270 participants.
Eikon (1969, 4 mins) The secular icon is accompanied by a looped soprano note with stereo violin improvisation.
Home Movie -- A Day in the Bush (1969, 4 mins) Two figures repeatedly traverse a deep space in the bush, towards, away from, and across the camera field.
Harry Hooton (1970, 83 mins) Conceived as a huge energy field of light, colour, movement, editing and sound -- a dense, vibrating, pulsating work, unrelenting in its thrust. Computer-generated sound is intercut with Hooton's voice. A tribute to a friend who deeply influenced us.

Back to Cantrill home page